Lo, the winter is past, the rain is over and gone; the flowers appear on the earth; the time of the singing of birds is come.

The first day of spring, and this is the view from our kitchen window. As the new season arrives with sunshine and warmer breezes, the town itself seems to emerge from hibernation. People are out and about, promenading through the town. Not just scurrying between the shops, but lingering at picnic tables, soaking up the sun on a park bench, or playing petanque on city hall square. St. Laurent du Pont seems to have a smile on her face these days, and in one way this is literally true.

Only a week earlier France dropped the majority of its Covid-era policies. No more masks. So we are seeing smiles, because at last we are seeing faces. March 20 was not only the first day of Spring, but it was our first Sunday at church free of masks. Gone too is the requirement of the vaccine passport (three shots) as a barrier for many people to go to the movies, eat at a restaurant, attend a concert, travel on a train. 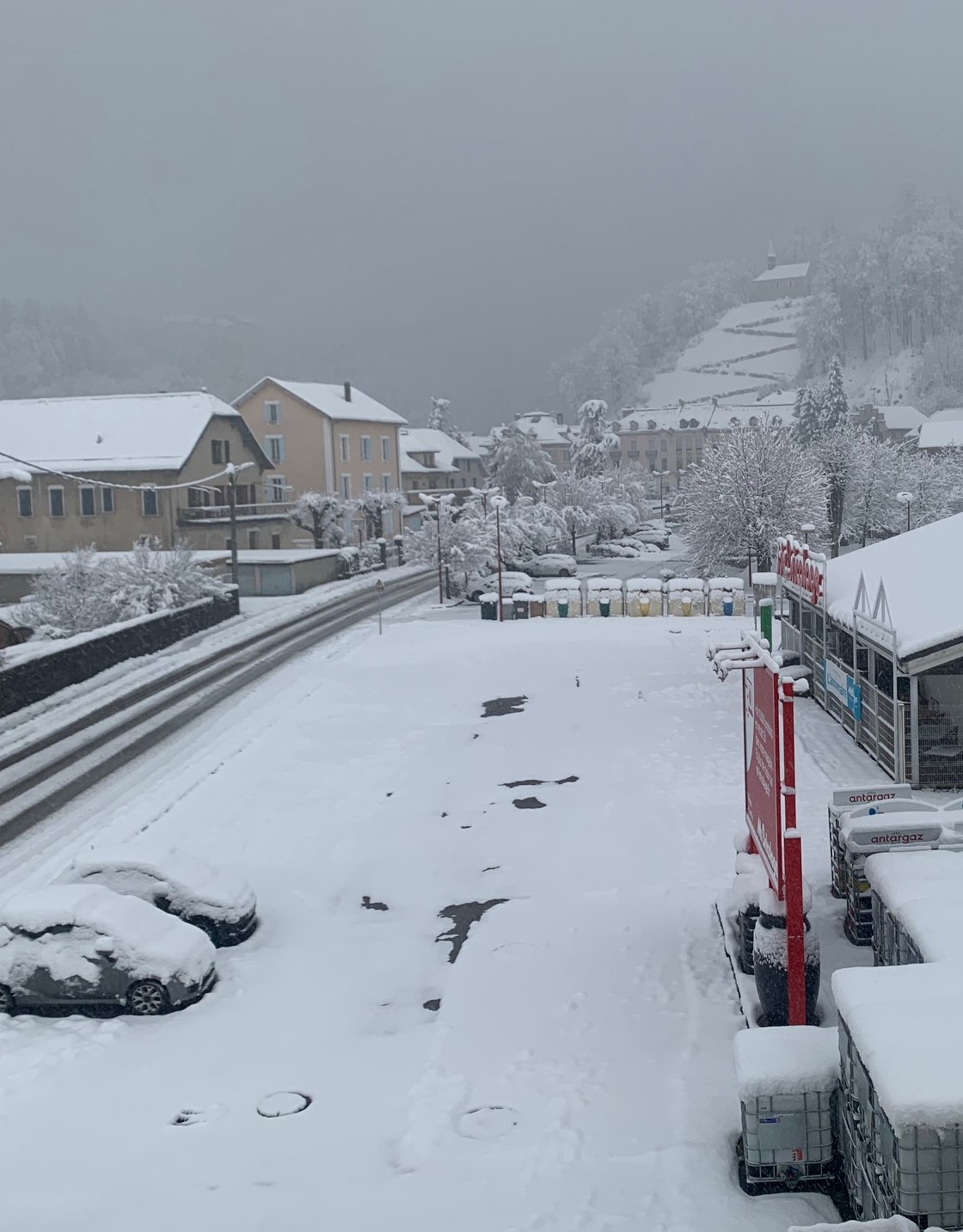 And then… April Fools! Or as they say here in France “April Fish!” (poisson d’avril), winter seems to have returned with a vengeance. Here is the same view as of April 1.  Brrrr.  It kept on snowing for two days, dropping about a foot of snow. Today, April 7, springtime sanity has returned, with April showers washing away the April blizzard.

Good thing we haven’t planted any veggies yet. Everywhere people are getting busy with their gardens, and that includes us. As it happens, a lady in our church has moved down to the coast to be nearer her children. And she was nice enough to pass on to us her space in the church community garden. So once all the snow has cleared off, in go the cilantro and jalapeños (basic Texan survival crops), as well as the parsley, sage, rosemary, and thyme.  Behold the Cotten acreage, front section of the middle row, below.

We’ve been busy with our work with Ellel Ministries:  three weekends ago we held session two of the year long EXPLORE school. Two simultaneous tracks, actually, the A school and the B school. This time we had twenty enrolled, and so between attendees and some staff members we had a full house here. The A topic was “Knowing God,” and so teaching on our Triune God and on the Persons of Father, Son, and Holy Spirit. The B topic was “Rewired,” all about true and false beliefs, and the behaviors which stem from each. The weekend consists of teaching, discussion, reflection and encounter, creative expression, and prayer. Sunday morning the floor was opened to testimonies from attendees, and face after radiant face declared the wonders of our Lord as they expressed gratitude to new understanding, deeper insights, and closer communion with God. “Draw near to God,” James tells us, “and He will draw near to you.” How does this work? “Cleanse your hands, you sinners, and purify your hearts, you double minded.” (James 4:8) Yes, like that, repentance, renewing of the mind, and calling on the Lord out of a pure heart (see 2 Tim 2:2b). Please continue to pray for us and the rest of our team as we progress through the year. And pray for the attendees to have life-changing and transformative encounters with the Lord.

Leadership may be changing on the national level here in France as well. President Emmanuel Macron’s five-year term is coming to an end, with the French presidential election coming this next Sunday (April 10). He’s up for reelection, of course, and is leading in the polls, but not by much. There are eleven other candidates from across the full left-to-right spectrum. So a two-party system this is not. Elections here differ from those in the States in a number of ways. First, the list of candidates has only been finalized for about a month, and campaigning lasts only two weeks. As of this morning, Macron leads polls at 27% , closely followed by second place at 23.5% and rising. With twelve running, no one candidate reaches a majority in the first round, and that’s why there is always a second round of voting. So, two weeks later, on April 24, first and second place square off, head to head,  guaranteeing one of the two will win a majority. This means about half of voters vote for a candidate they previously voted against.  Anyway, please keep the French presidential election in your prayers, that God would bless this country with godly leadership.

The attention of the world, of course, is focused on Ukraine, as the war continues there. Naturally, people here in France are uneasy, as all of Europe must be. Ukraine is a thousand miles from us, but a thousand miles is like Dallas to Charlotte. Europe has so often become a battlefield, two world wars in the twentieth century, to which memorials in every town can attest. People here want to help in material ways: collecting supplies, sending aid, readying their houses to receive guests in need from the east. Many have personal connections. Ellel Ministries for example is active in several countries in Eastern Europe. Let’s all keep on praying to our Lord for a resolution very soon.

He makes wars cease to the end of the earth;
he breaks the bow and shatters the spear;
he burns the chariots with fire.
“Be still, and know that I am God.
I will be exalted among the nations,
I will be exalted in the earth!”
The LORD of hosts is with us;
the God of Jacob is our fortress. (Ps 46:9–11)